So it was pretty miserable out today. It was snowing, and cold, and wet (Does April know it is April?) so while my little guy was asleep I took some time to whip up a fun activity for him to do when he woke up. He has been really into shapes lately ( not in the same way he is into cars but really they aren’t nearly as exciting to a toddler) and he has a book with shapes in it. He likes to sit with me and point to them and I will name them out loud, or I will ask him where the oval (star, square, ect…) is and he likes to point it out to me. I was at the dollar store near my place last week and I picked up some Bristol board and Velcro dots. I bought them on a whim and as I figured they turned out to be useful. This is a simple activity for toddlers to learn their shapes, I did it with my 22 month old but it would work for an older or even younger child. I traced or freehanded some shape outlines onto a big piece of Bristol board and labeled them.

I then added the Velcro dots, depending on how many of that particular shape I planned to make. I cut out shapes from construction paper. (for a more durable piece laminate the shapes.) I added the opposing Velcro dot to the shapes. 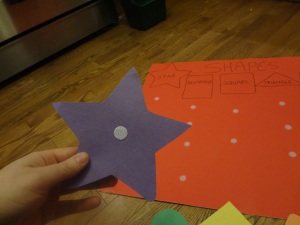 The idea is for them to sort the shapes into their proper column and stick it on. Well it was a success. Once he got the idea he spent almost half and hour figuring out which shape went where and sticking it on. I ended up sticking it on the window because lets face it, there isn’t a lot of wall space in our house, there seems to be stuff everywhere! 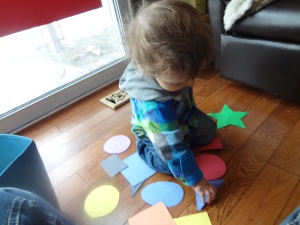 He had a bit of trouble telling apart the rectangles from the squares, but hey, that is the whole point of the activity. An added bonus was the fun he had ripping them off once he finished. (he really seemed to like the noise.) 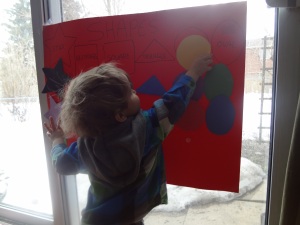 I hope you have enjoyed this post and find it useful! We certainty hope you will join us again for some more at Excite and Explore and that the weather gets better soon.<

Welcome to Excite and Explore, a blog dedicated to raising a toddler, sharing our experiences and all the fun we have. We would love to hear what you guys have been up to!

What have we been doing lately?

What you may have missed.

What Fun We Have